It is Fat Tuesday

Good morning you people!!
I hope you all have had a good Valentine’s weekend.
Here in my neck of the woods, it turned out to be a real nasty weather weekend.
Peter and I had planned on a long, local hike (that also involved grocery shopping while out. Backpacks, ya know). BUT, forget about it … It was sleeting, snowing and raining … AND then came the ice.
It turned out to be an ice storm in the end.
Ice storms are the worst kind of weather since the icy water falling from the sky turns the whole world into a frozen ice sculpture. During an ice storm sidewalks and paths get covered under a thick bark of ice. Not a fat chance that I would risk breaking a bone on that surface … NO way!
Other than the weather situation the weekend was good.
Peter and I hung out at home all day Saturday, we watched a movie on Netflix in the afternoon, Like Father with Kelsey Grammer and Kristen Bell. It was cute. We both liked it. A perfect Valentine movie even though it wasn’t a romantic comedy.
It was more of relation drama/comedy about an adult daughter and her very estranged father who had now reappeared into her life. Yes, a totally fine movie to watch during an icy afternoon. We made a really good dinner as well, coq-au-vin. Also very fitting on an icy Saturday evening.
AND, today it is Fat Tuesday.
Not that I am observing that day, per se.
NO semla for me today, gaaahhh!! I wish.
A semla (in English, shrove bun) is a pastry that is traditionally eaten in Sweden (and Finland) on Fat Tuesday in preparation for lent.
A semla is a wheat bun flavored with cardamom. It is filled with almond paste and whipped cream. It is pretty much my favorite amongst pastries in the world. And, in Sweden you can enjoy it to its fullest today on Fat Tuesday. Actually you can enjoy a semla all winter long in Sweden (and beyond maybe nowadays). OOOOO, today I envy you Nordics so much!
Sure, I could bake one if I really wanted one … The problem is that, I do not bake … SO, therefore it will be zero semla today. Here in the US it is tradition to fill up on pancakes on Fat Tuesday, as it is called Pancake Day, also in preparation for lent. 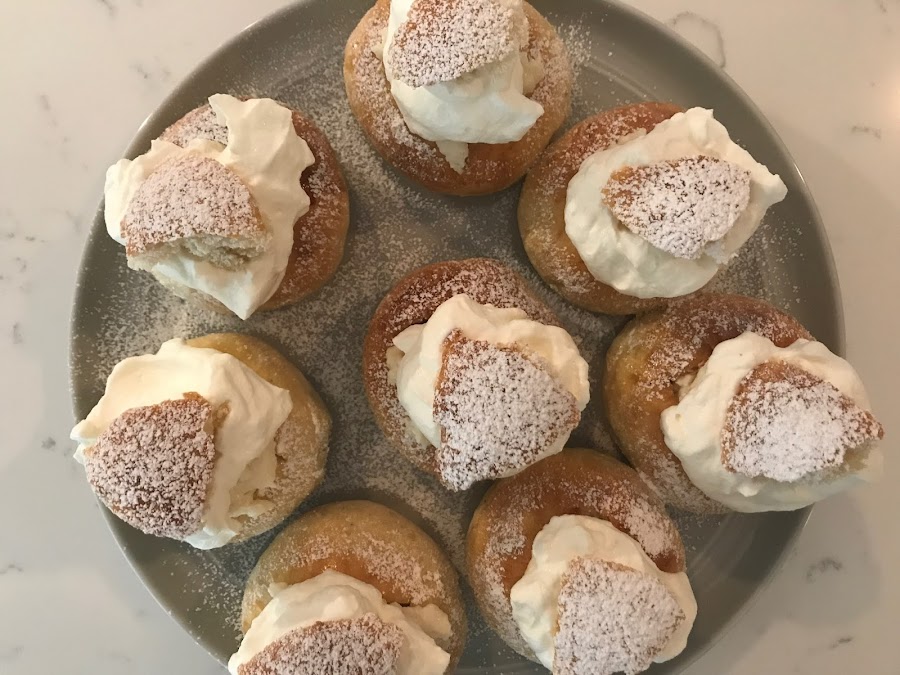 Semlor from a previous year made by my friend Lotta.  Scrumptious and so delish.
When we were in New Orleans two years ago—-You might remember our Road Trip Galore when we crossed the US with car—we enjoyed their version of a semla, a King Cake.
It was interesting to try it. BUT, there is nothing like a semla, after all. Of course not! 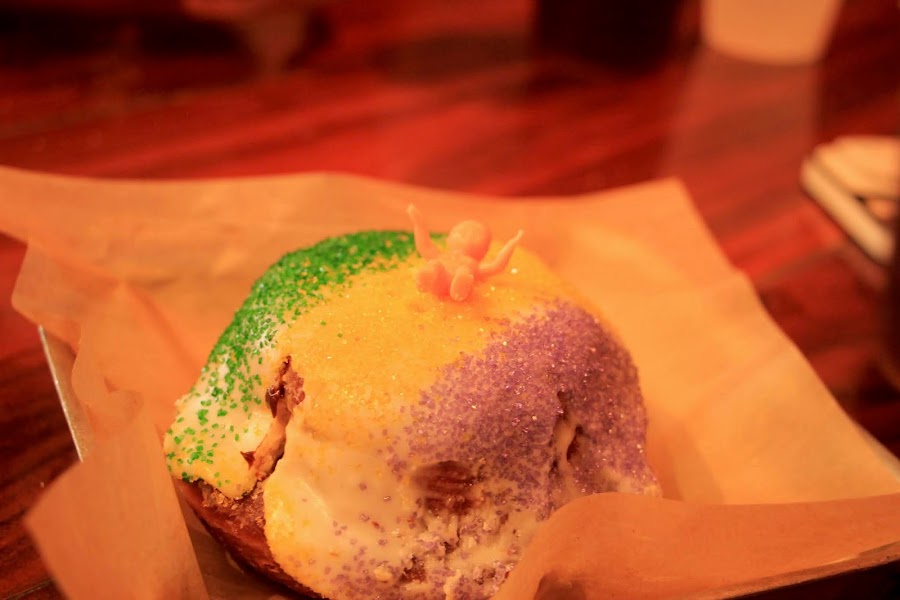 A King Cake in New Orleans pretty much exactly two years ago.  Do you see the Baby Jesus on top of the pastry? Baby Jesus always tops a King Cake.
But, it is interesting to see what the christian world are eating in preparation for lent on Fat Tuesday.
Lent by the way, that is something I have never, ever practiced.
I am not religious, I am a good old agnostic soul. However, there are many people who are giving up something for lent. It can be sugar, alcohol, shopping, Netflix or whatever you feel like abstaining from for 40 days.
But, no I am not giving up a single thing for lent.
Tomorrow is Ash Wednesday, I remember when I was new to the US and worked as a visual merchandiser at Lord and Taylor (department store).
On Ash Wednesday a lot of people (especially catholics, I believe) go to church in the early morning. During the communion, the priest paints a cross on ones forehead with ashes (or it is supposed to be ashes, I have no clue what kind of paint the priests are using for this cross). The cross tends to get smushed so it just looks like a big black blob on peoples foreheads.
I had NOOOOO clue what these blobs meant when I was a newcomer.
My boss was the first dude I saw that morning. I looked at him and said,
-Ummm … Zac, I think you have smushed something on your forehead …
-Honey, where have YOU been? It is Ash Wednesday!
HAHA!!!
Well, it was there and then I learned about the rituals on Ash Wednesday-- and this mostly catholic tradition (correct me if I am wrong)-- with crosses painted out of ashes on peoples foreheads.
You live, you learn, and when you are new in a country you usually have zero clue about things like these.
Oh well, have a nice FAT Tuesday, and enjoy all the SEMLOR YOU possible can today, I am SOOOO JEALOUS!!
EAT one for me! Please!!
Posted by Annika at Tuesday, February 16, 2021

The King Cake was awesome! If only we could have it every year! Hard to believe it was 2 years ago. What a trip. But I hear you on not really "celebrating" Fat Tuesday or Ash Wednesday. Been years since I had ashes "smudged" on my forehead. Still a novelty in a way to see someone with ashes.
Messy last Saturday for sure. We'll have to see what kind of mess Thursday brings.

Keith;
Yes, I remember that we shared one between the four of us. I would love to try it again.
What a trip. I'd gladly do it again. And we will!! The Northern route.
O MY, the first time I saw those smudges, haha!! I guess this year is the year we won't see a single smudge out and about.