Good morning Tuesday people!!
So, I guess it is summer now. For reals.
Why do I say that? Well, because my hubster and I did turn on our AC over the weekend.
So, therefore it must be summer.
Actually, it is the humidity that is the biggest problem. The humid air seeps in to the house and with that your best bet to fight it is to run the AC.
SO, summer it is.
It’s been a rainy weekend for the most part.
In the late afternoon on Friday, Peter and I moved back and forth between the deck and our new Nestled Nook (indoors) as we enjoyed our happy hour. One minute it was raining, the next the sun peeked thru. 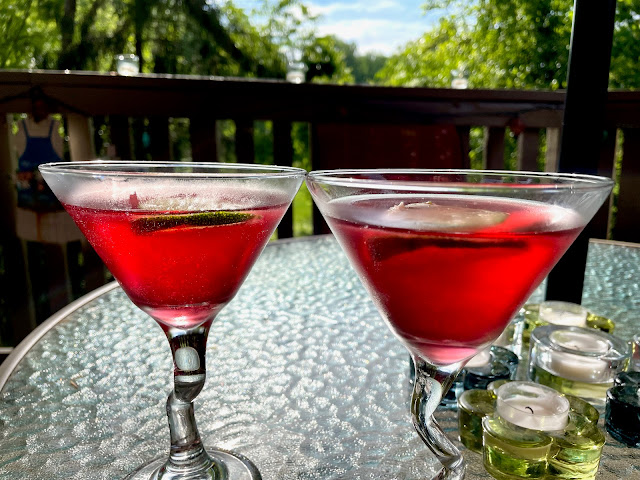 One minute we had cosmos in the heat on the deck ... 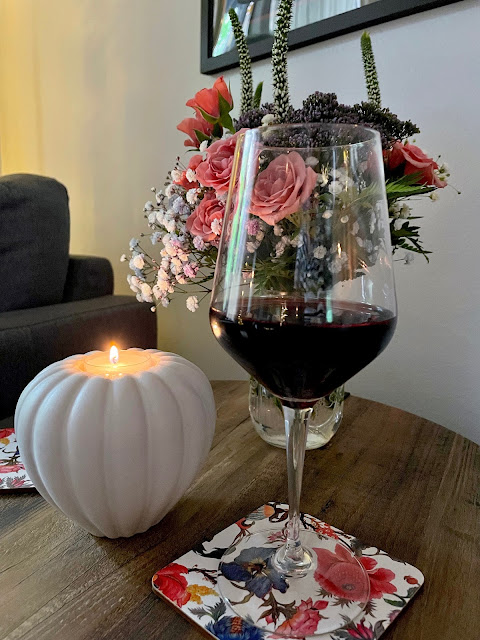 ... The next we were moving inside (and switched to red wine). 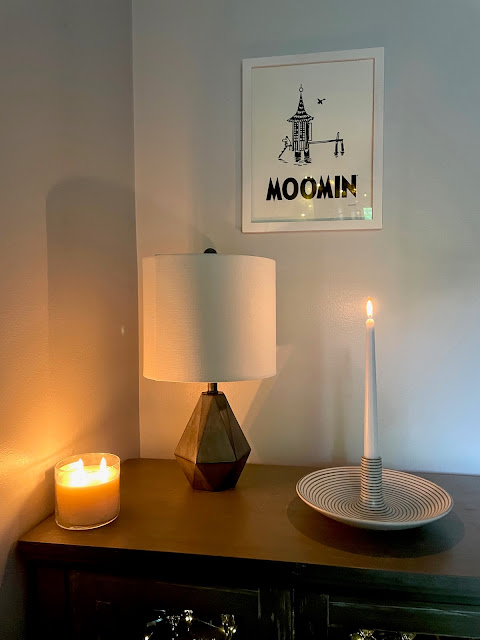 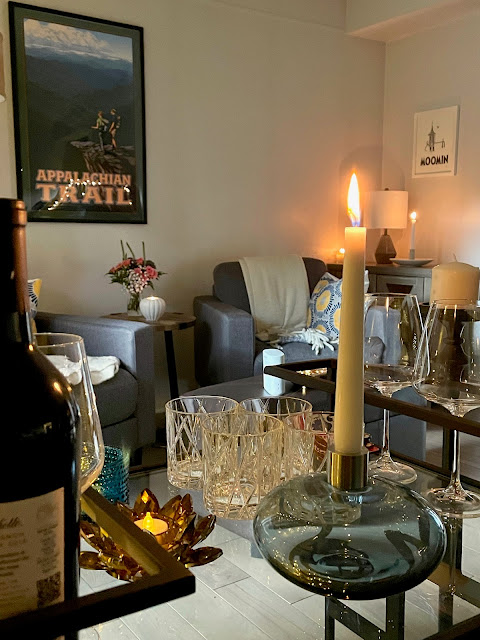 Did you guys watch the European Song Contest?
WE did!
It is so much fun with the whole ESC hype (both Peter and I think so). I am so glad Peter appreciates it as well.
During the show, I was seriously chatting with my sister in Stockholm. It was SO fun to discuss every single song, and the show as a whole, with her as we both watched it live. LOVED it!!
I thought the songs were better than usual this time around!
I got quite a few favorites.
Ukraine won, as everybody predicted, and I actually like that song a lot. Sweden delivered as well! Cornelia Jakobs did a fantastic job, and I really DO like her song. I fell for Lithuania as well.
And as I said, many other songs were great. I love the whole ESC-extravaganza! It is SO much fun!
For us here on the American east coast, ESC started at 3PM and it ended a little bit after 7PM. Nice for us!
My thoughts went back to the American Song Contest yet again …
There are many reasons that this contest did not take off in the way the producers were hoping for. First and foremost, it all takes place within ONE country, we all speak the same language and the culture between the states are somewhat (and most times very, very) similar.
Of course, you have the west coast sound, country, blues, bluegrass and what not. BUT those sounds are still SO VERY established among us all.
In Europe, every country is different (and very much so at times), different languages, different cultures and the music differs throughout eastern Europe, southern Europe and Western Europe.
Some songs are downright weird in our ears, but it is still so fun!
I do not think it is strange at all that the ASC did not work out, you cannot throw a contest like that within the same country (no matter how big it is).
You CAN, of course, but then you will have to call it something else and make it a bit different. As I stated before, you sort of have to have—the craziness surrounding this kind of show— in your blood in order to appreciate it.
Sunday afternoon was beautiful, sunny and warm.
We took a long walk around Peter’s old university, George Mason in Fairfax, that was a lot of fun. We also walked in our own "back yard" once we got home. 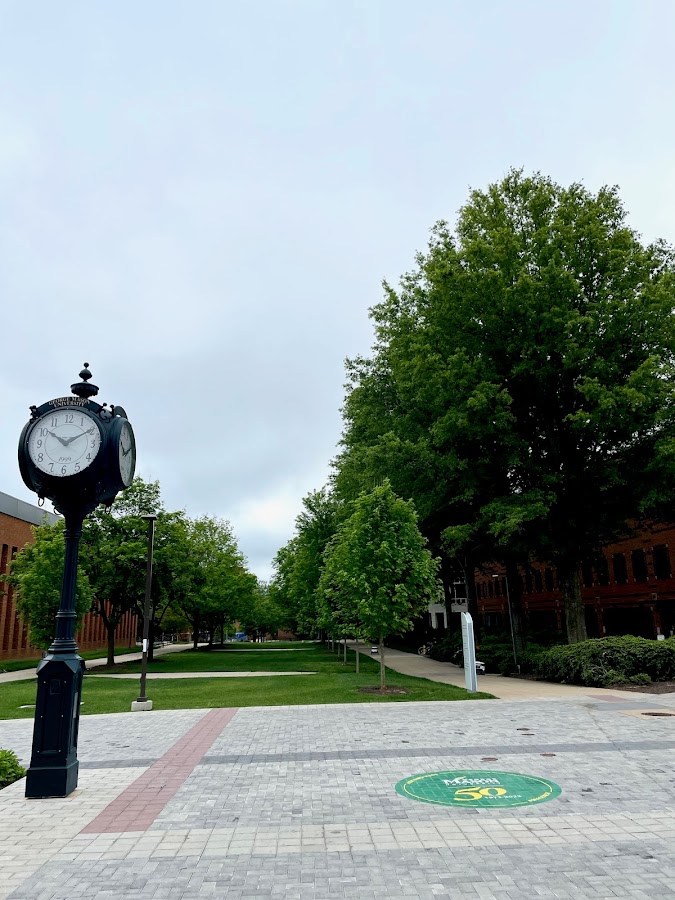 I love these clocks that you can find on so many campuses in this country. 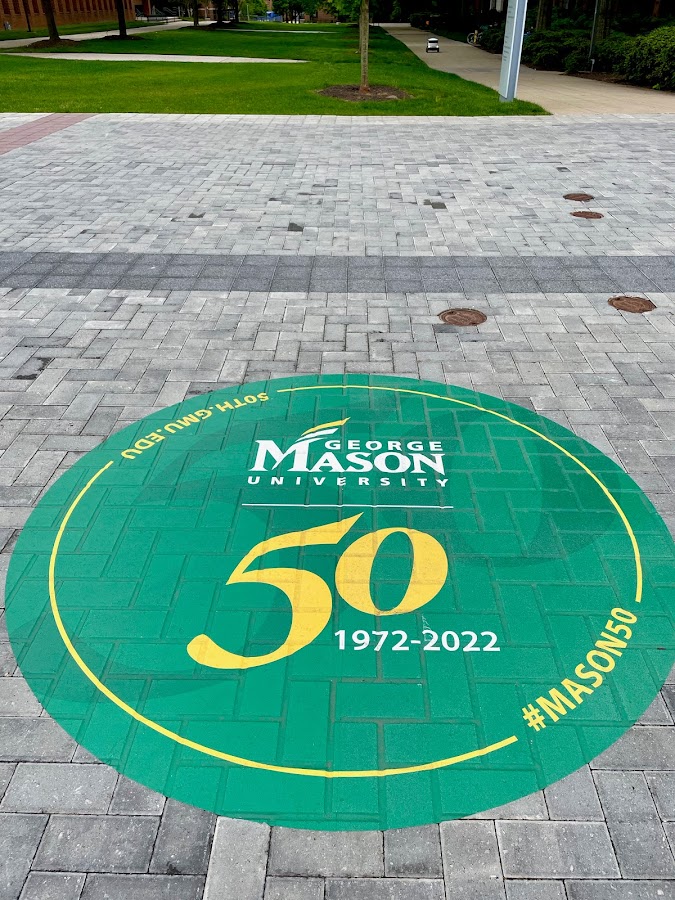 Peter's Alma Mater!!  And you can see it is quite new university, only fifty years old.  But, it is now a big, public university in the state of Virginia with about 40.000 students (both undergrad and postgrad-students). Peter started here in 1983 and graduated four years later.  He really did like his time at this school, even though it was smaller back then.  Peter's dad lives next door to GMU. 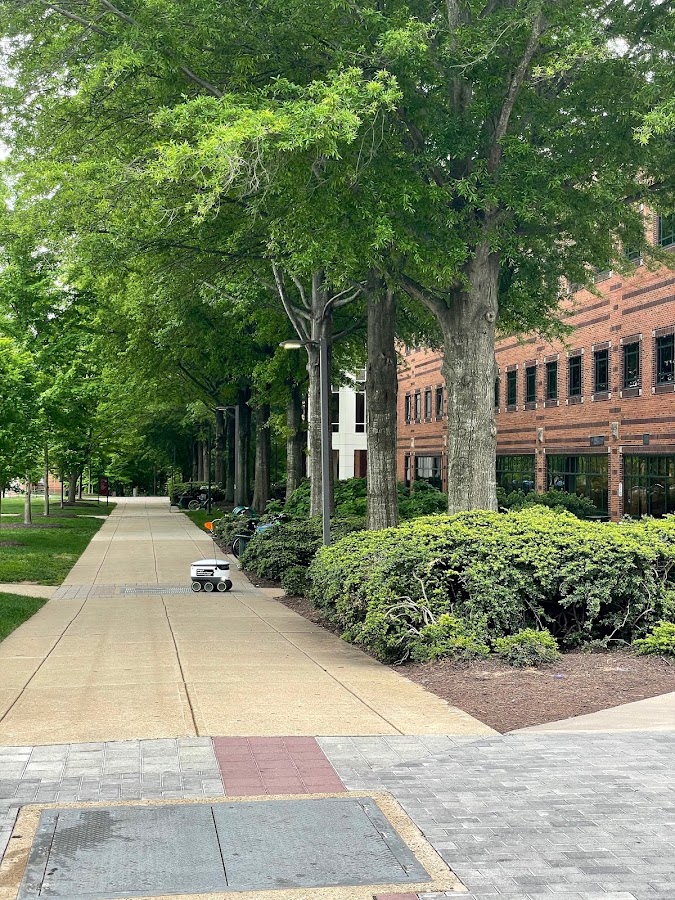 Back when the hubster went to school here you could NOT find this little automated food delivery robot trucks.  HAHA, I thought they looked so funny as they were traveling throughout the campus delivering food to the dorms. 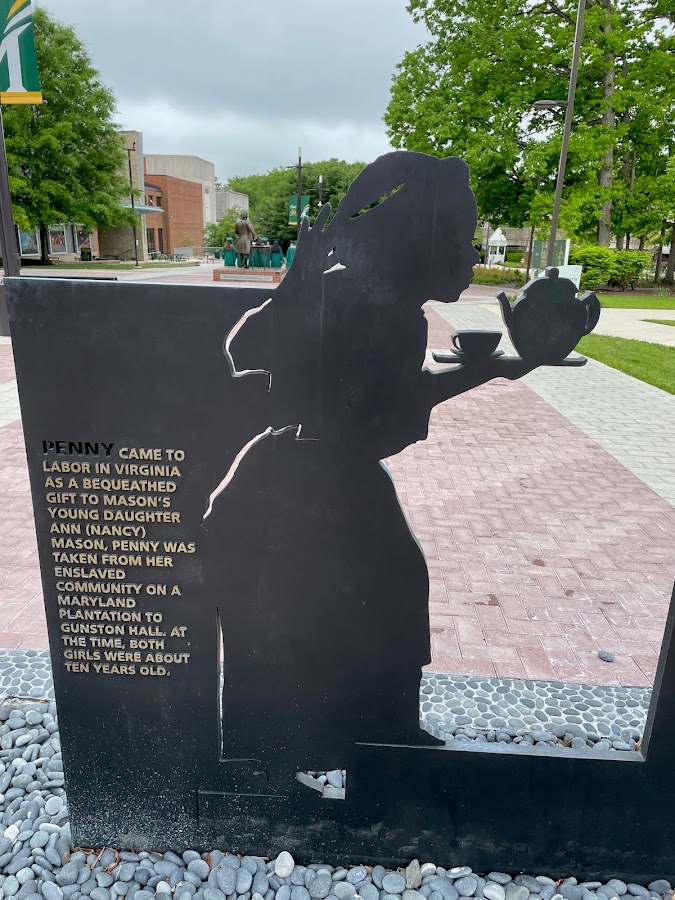 It is all about George Mason, one of the founding fathers. Can you imagine a ten year old being given (SOLD from her previous slave owner, of course) away as a "gift" to another ten year old in another state.  How very sad.  I hope Penny's life turned out to be good, after all.  And, I hope she got to see her own  family even after she came to Gunston Hall (George Mason's plantation in Northern Virginia). 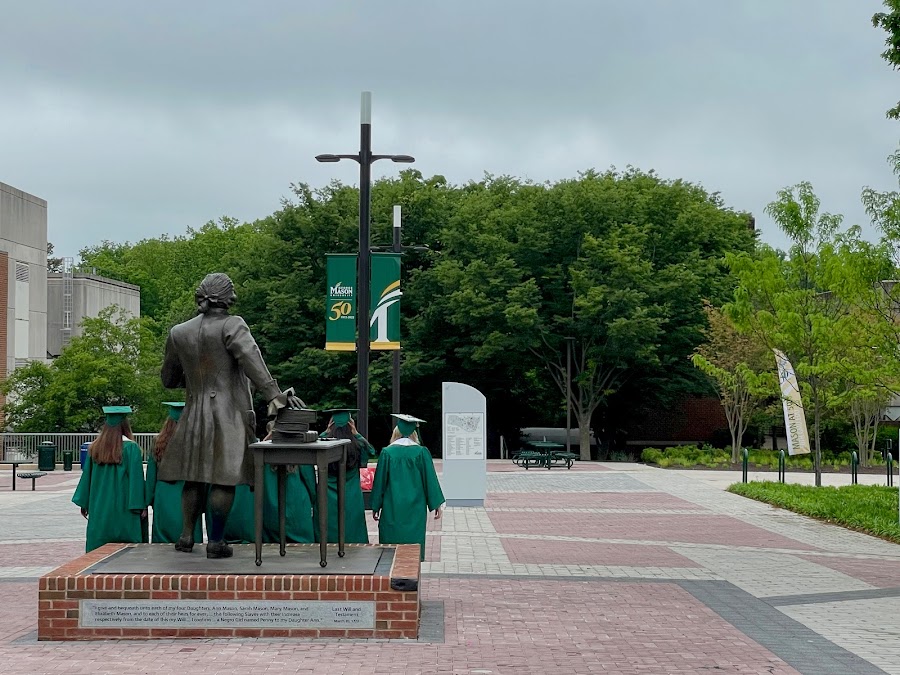 Here is George Mason himself and a group of graduates.  Graduation takes place this  upcoming Saturday, but you could see a lot of graduates having their photos taken. 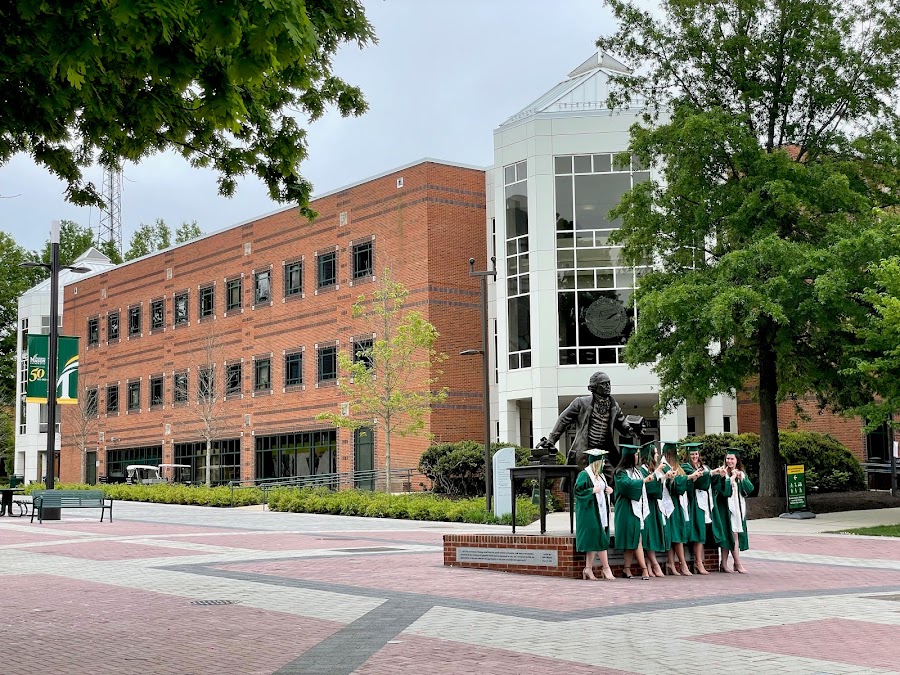 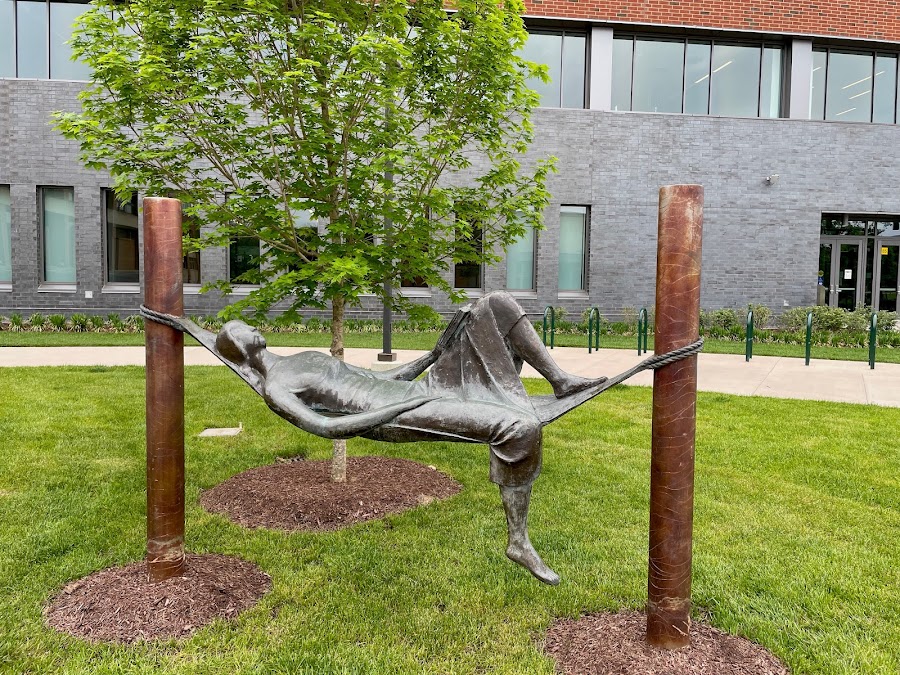 Statues here and there ... 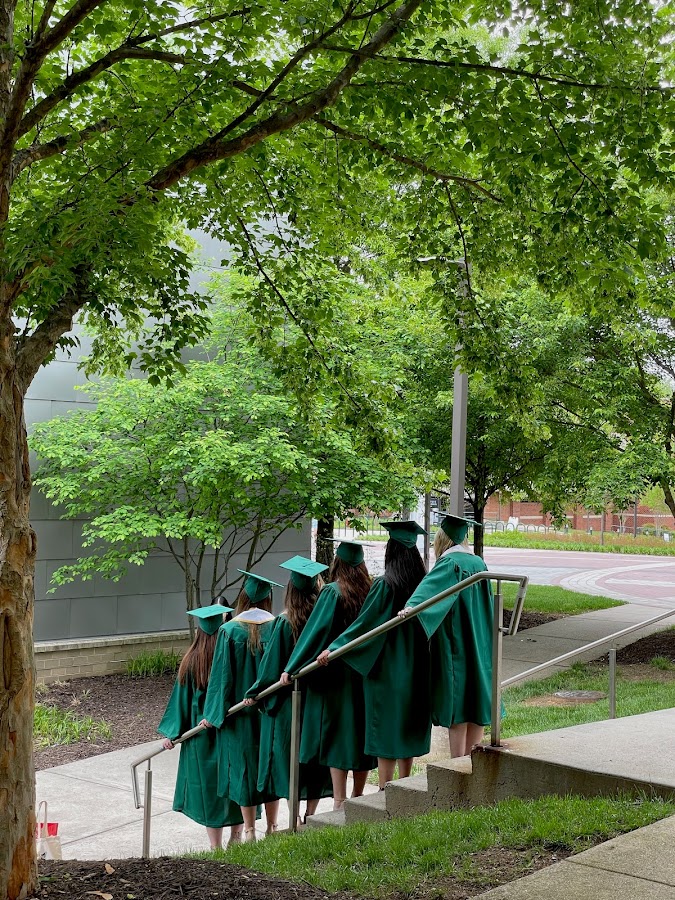 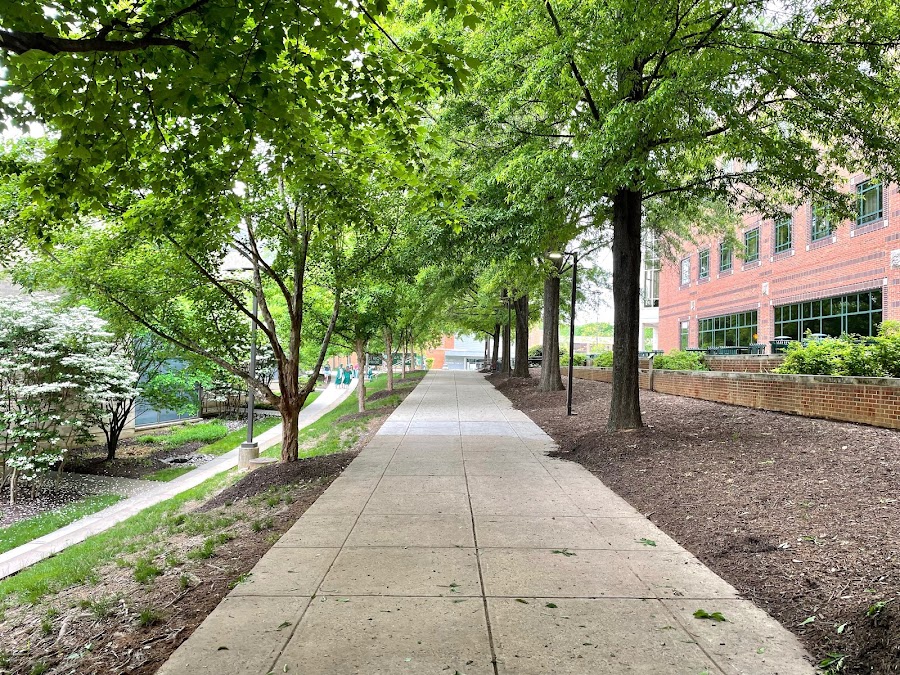 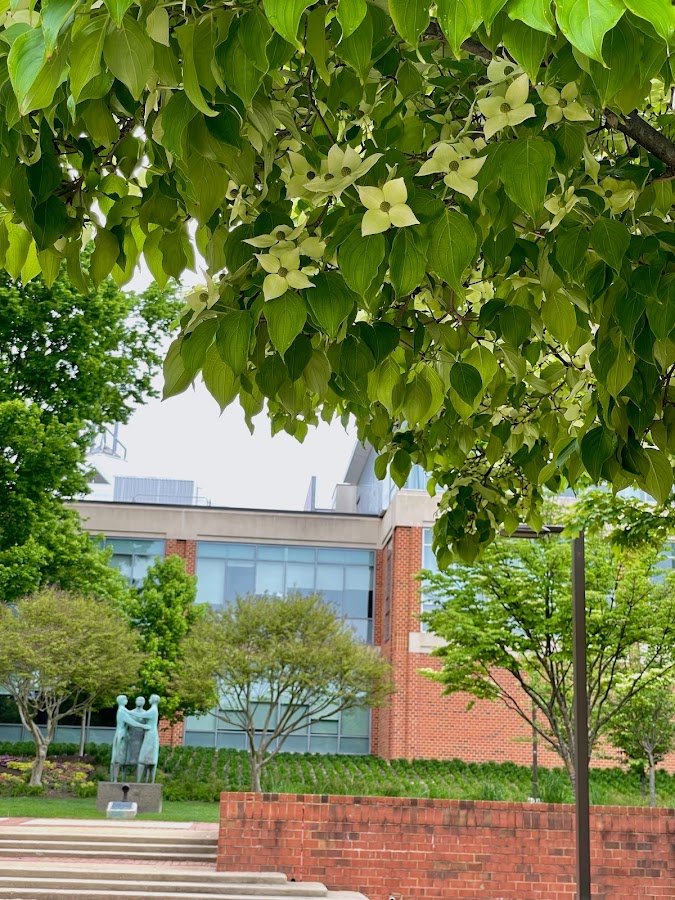 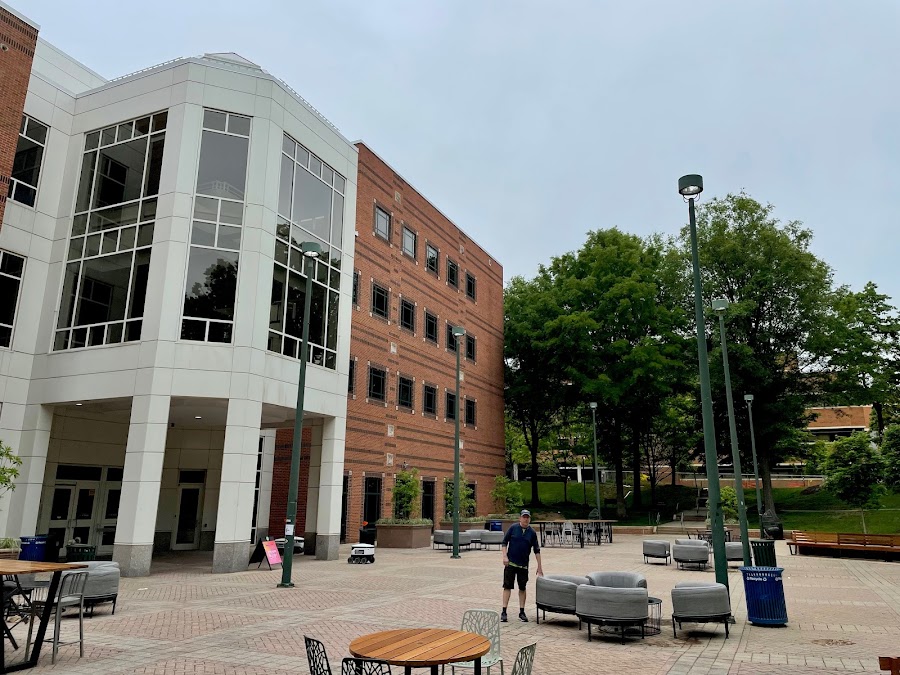 The only students remaining on campus were the graduates.  All the under-class men had left the school for the summer.  Therefore it was pretty quiet as we walked around. 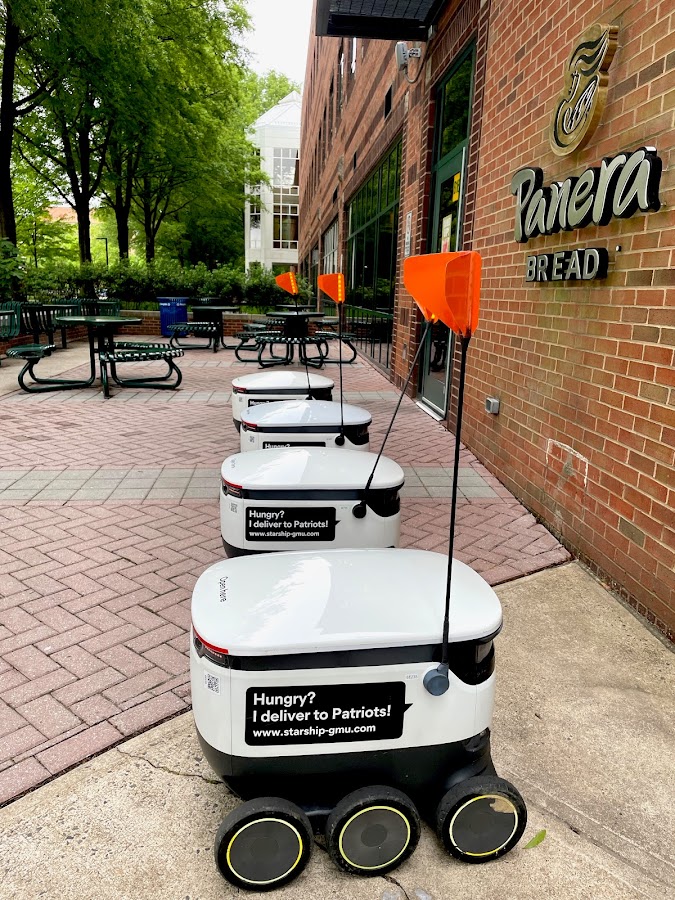 These little food delivery robots cracked me up. 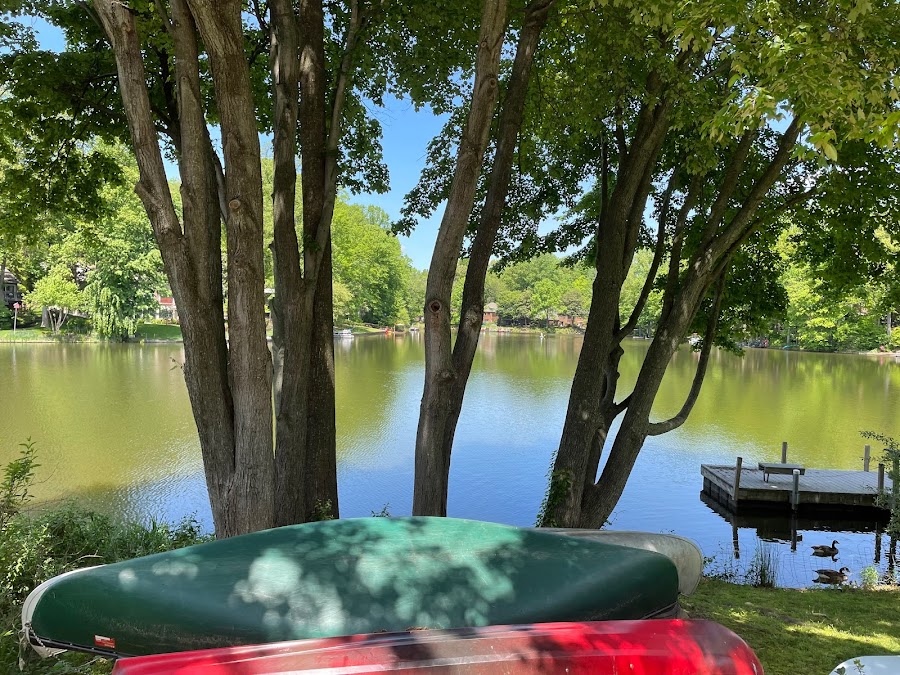 And, as we returned home the sun decided to shine from clear skies. 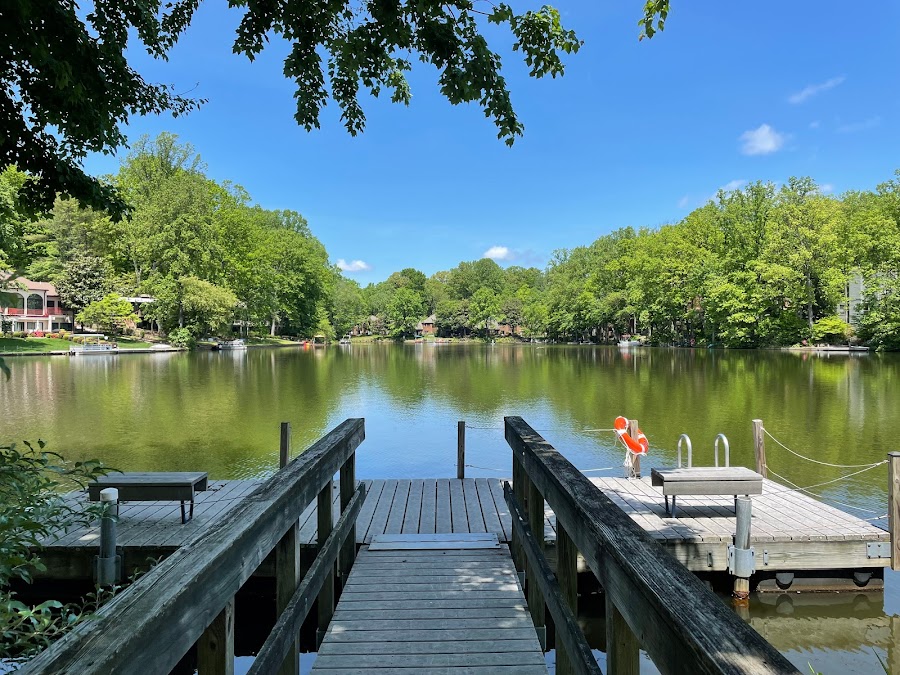 This is a dock down by Lake Thoreau.  It is so pretty right here. 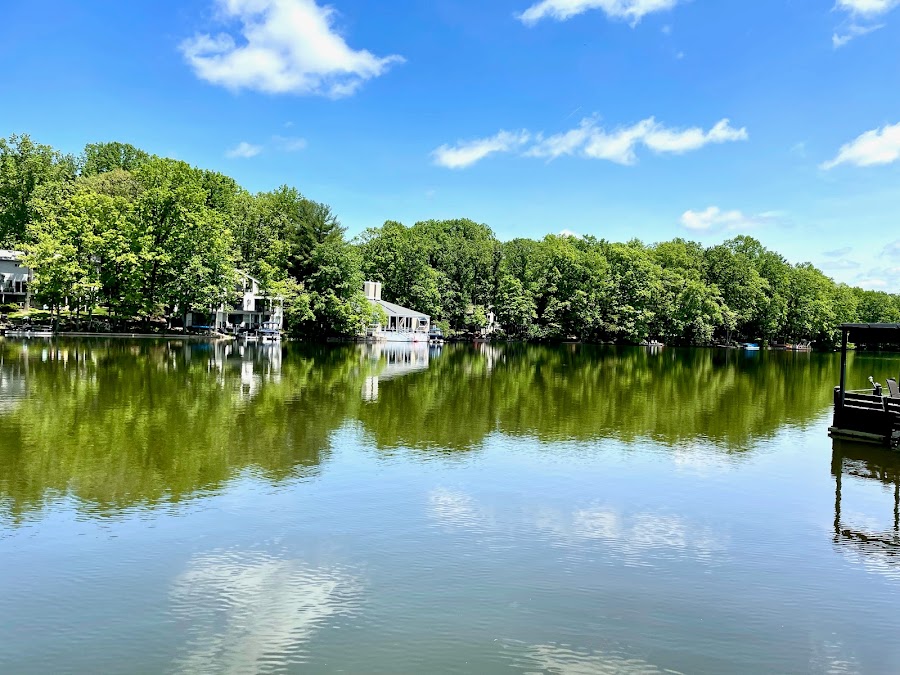 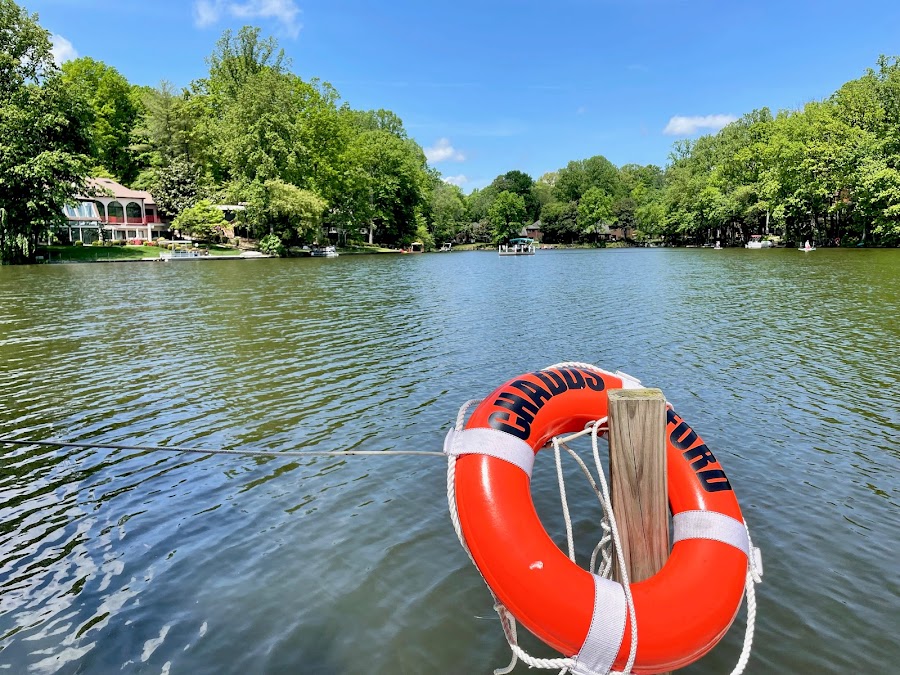 🎵Blue skies smiling at me. Nothing but blue skies do I see🎵 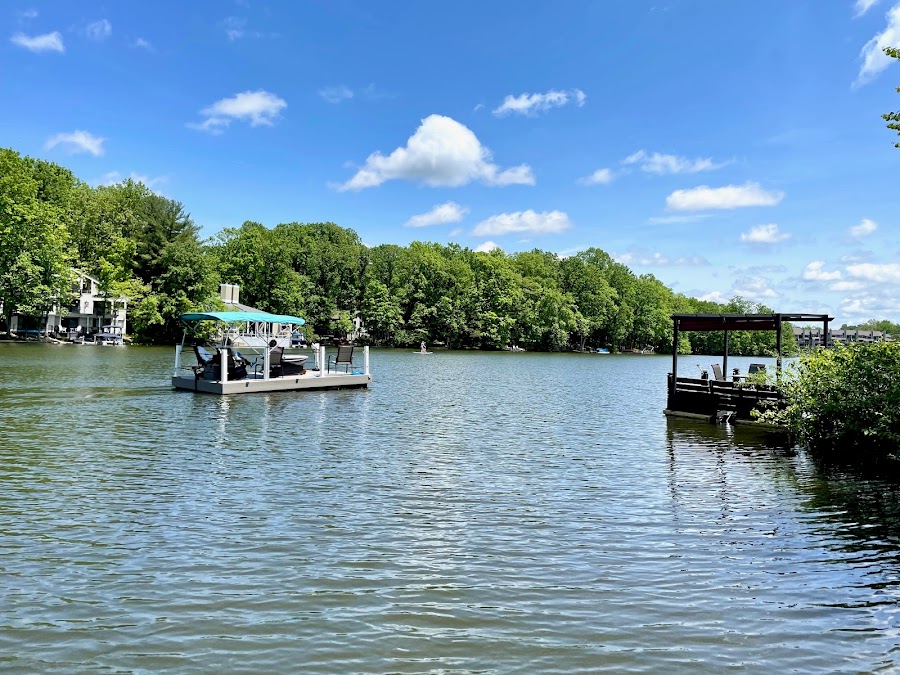 It must be so nice to own a floating veranda.
It 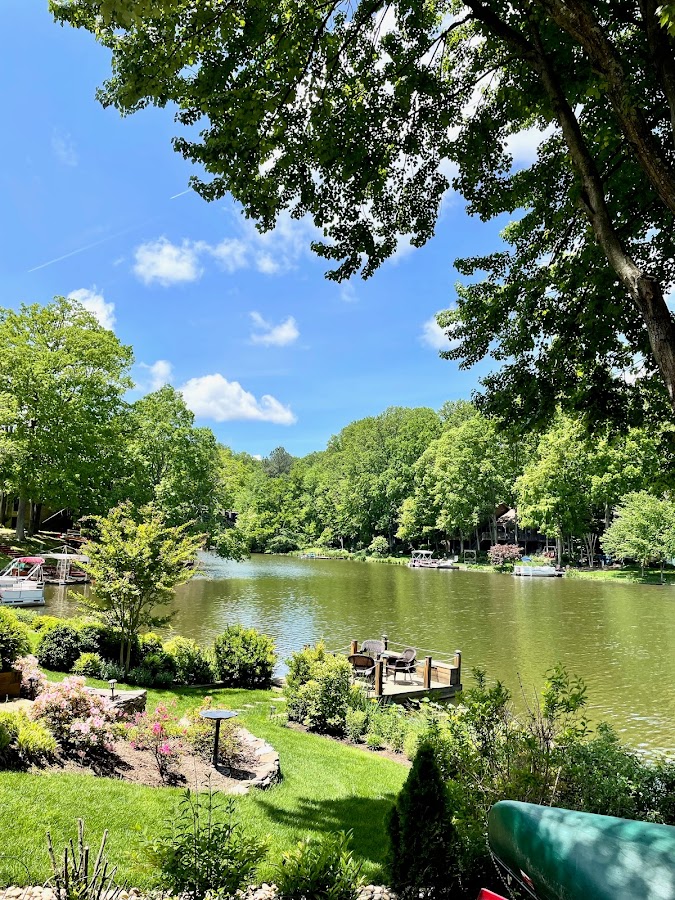 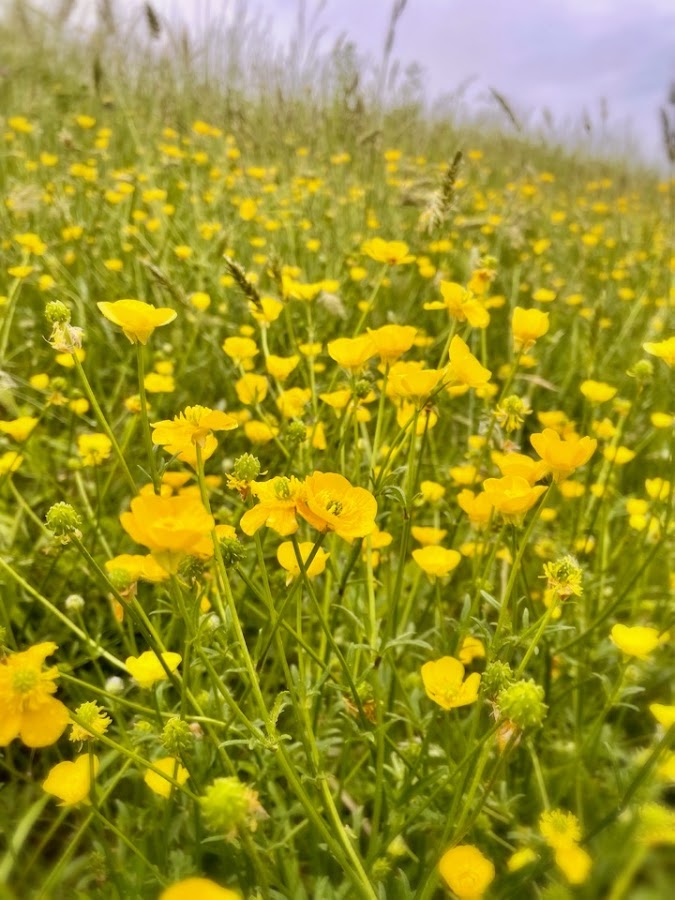 🎵Why do you build me up (build me up) Buttercup baby just to let me down🎵
With this I wish you a very good Tuesday!
Posted by Annika at Tuesday, May 17, 2022

It's about to be hot up in this place! Well, you know what to expect. 5+ months of AC weather. Quite a storm we had yesterday, though. Fun to watch ESC! Of course, lots of people rooting for Ukraine. Nice to see what GMU looks like these days.

Keith:
YES, we're about to get hit BIG time this weekend.
HOTTER than hell!!
Not looking forward to it.
Glad you got to see part of ESC! More next year.
Yeah, GMU for the win right?
:-D

KRAMAR i massor till dig!