The past weekend marked our last auditions. Well, we have one, tiny audition left in the end of March, but that should be a low stress one.
SO. VERY. NICE. TO. BE. DONE. WITH. ALL. THIS.

I cannot wait to spend several weekends at home.

Tomorrow, I'll write a post about the audition process in Swedish. I will list plus, and minuses, the best, and worst.
How an audition works and so on.


My Canon is taking a rest by the moment (I have ordered a new lens now, and it is on it's way, hurray!!!).
The past weekend I used my iPhone as a camera, most of the time. 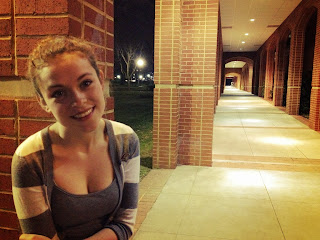 When we got to Elon University in Burlington, North Carolina it was 73 F outside!  That is about 23 C!  It felt like spring.  It was the first time in months we experienced warmer temps!  It was nice!  Last time we were in Elon we were so COLD, and that was back in November. 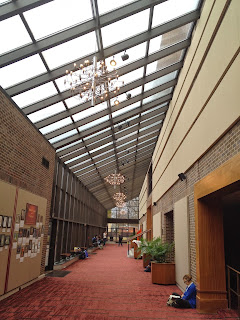 Inside the building of Performing Arts at Elon.  This is where all the auditions took place.  The weather this day was FREAKY!!!  Thunder, torrential rain, tornado warnings and wind!  There was NO way that Peter and I could stroll around Elon's VERY beautiful campus.  We had to stay inside.  Karolina was busy  observing an acting class before the auditions.   The auditions started in the afternoon, but we checked in at 9:45, I believe... 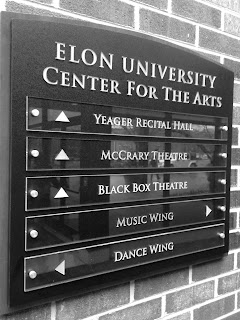 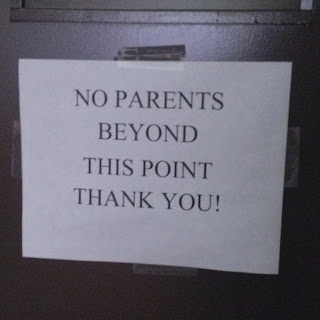 Parents cannot walk past certain points when the kids are auditioning.  NO WAY!  STOP!!  NO parents allowed. 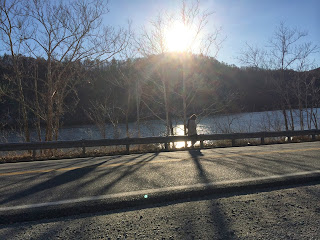 WE have left Elon.  Here we are somewhere in the Blue Ridge Mountains in Virginia.  The drive from Burlington, NC to Harrisonburg, VA was SO breathtaking, and SO scary!  We drove in the mountains on serpentine roads. There was still some snow left on some roads as well.  I held on for dear life in the curves.  Peter was a fantastic driver, as ALWAYS!!  Here I am, you can see me in this pic.  I am standing by The James River, taking pictures with my iPhone.  It was SO beautiful that it hurt me.  I really MISSED my Canon. 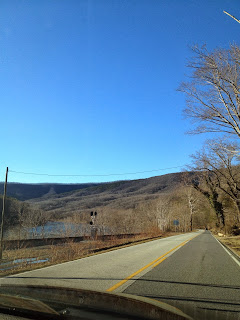 Almost heaven!  It is SO hard to give the nature justice when you shoot with a small mobile camera.  But these roads WERE simply AMAZING!!  This is a part of Blue Ridge Parkway, one of the most scenic routes in  eastern US. 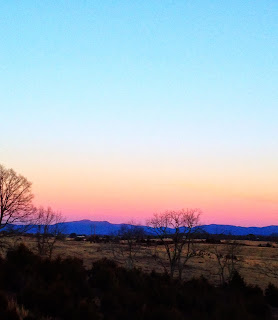 Here we are back on the Interstate-81 North.  We are in Virginia.  The sunset was SO breathtaking!! 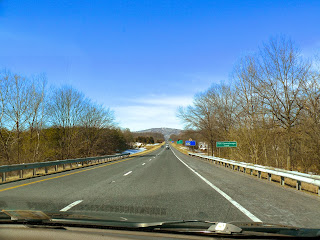 I-81 (motorväg) earlier in the day!  We left spring in NC and traveled towards the winter again.  Snow covered fields and mountains.  We spent one night in Harrisonburg, VA before traveling to Pittsburgh the following day! 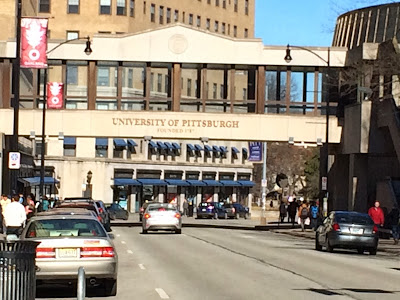 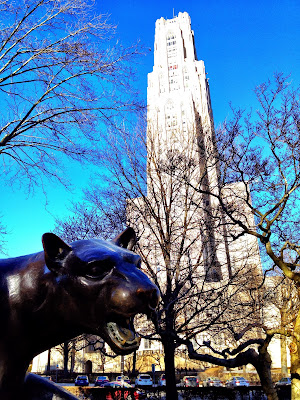 Outside The University of Pittsburgh!  The day was mild and so nice, 14 degrees C! 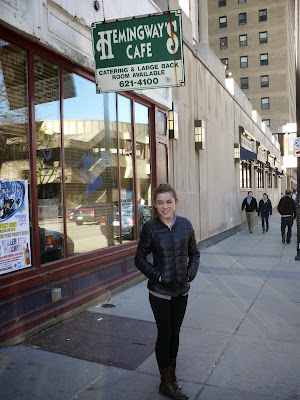 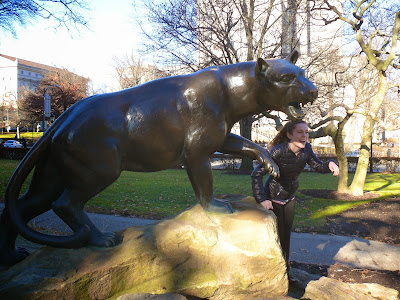 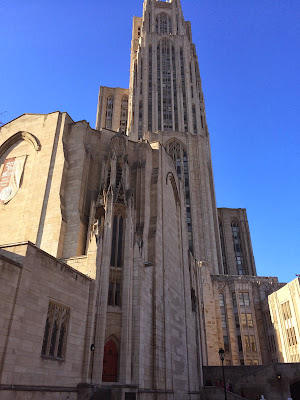 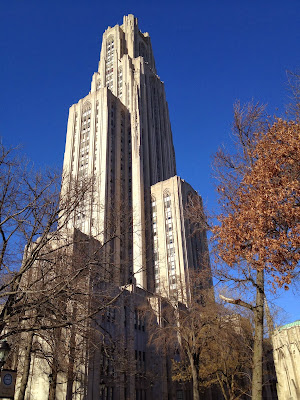 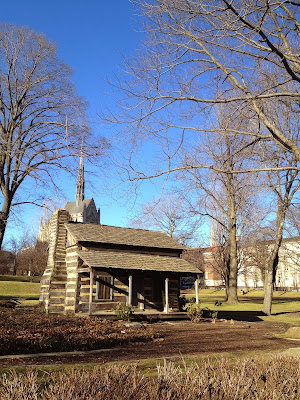 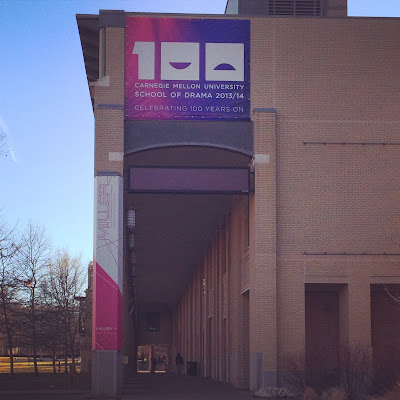 Carnegie-Mellon's famous,  and prestigious, conservatory drama school!  THE drama school accepts 7 actors into its program!  SEVEN!! 7!!!  Seven acting students, and seven Musical Theatre students.  Karolina would be an acting student if she got in.  The chances of getting in here are, obviously, slim to none!! 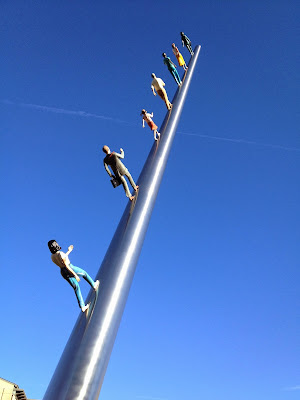 I love this sculpture outside Carnegie Mellon!!!  Walking towards success, I guess... 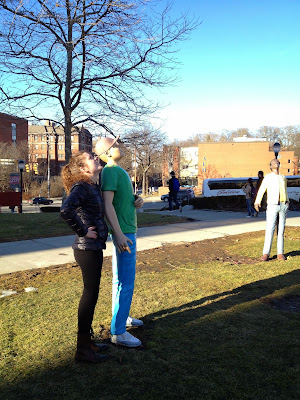 The "dudes" are part of said sculpture.  Karolina is nothing but real! 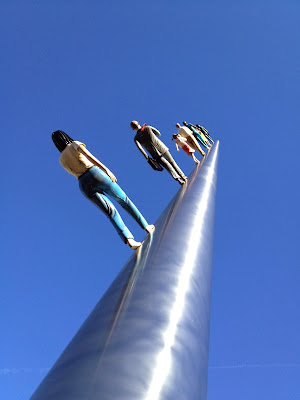 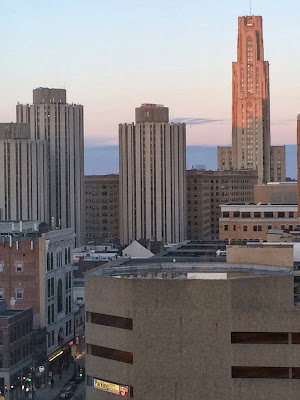 The view from our hotel! 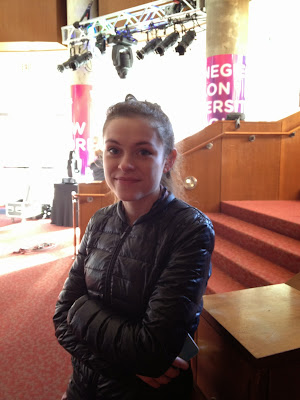 Karolina inside the drama school 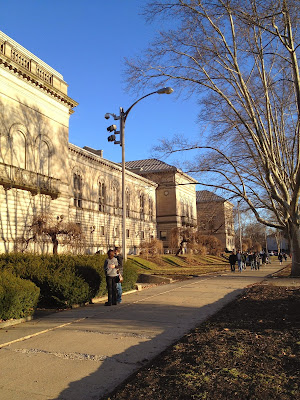 This is Carnegie Mellon's music school.  SO beautiful!! 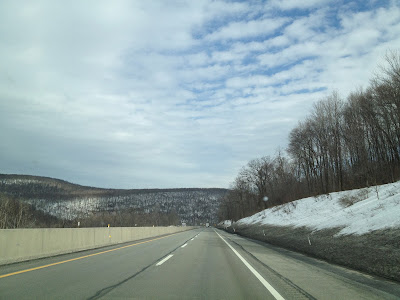 On our way back to DC again!  Nice roads, beautiful drive!! 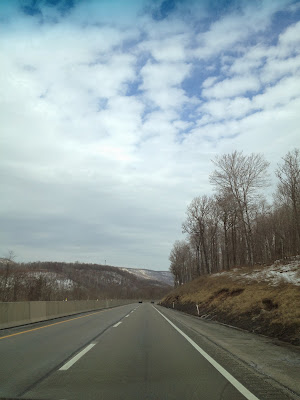 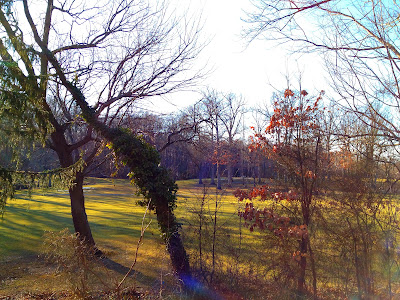 Have a good Tuesday!
Posted by Annika at Tuesday, February 25, 2014

Don't you wish Karolina had more auditions so you can continue to travel each weekend? HaHa! Nice to be done with those, I'm sure! Pitt is a nice town. Good to see it again in pics. Beautiful scenery coming up the Blue Ridge Parkway!

Keith:
Sure; I am so mad that we don't have any more lined up :-)
What are we going to DO with our weekends?? IDK??!!
Glad you like the pics!