What do you get when you take a bunch of white 35-70 year olds from DC, Maryland and Virginia?
A crowd dressed in jeans and black, a crowd that is super excited and happy?
That's right, you get a bunch of Bruce Springsteen fans! Screaming and yelling Springsteen fans!!
Yesterday concert was nothing but great! All of us, in the middle-aged crowd, were roaring! We could have brought down the house! People were just so happy to see the almighty Bruce and his E-Street band take on the stage! OWN the stage!
My lord what a performer the man is!!! As I said yesterday in my Swedish post, I am not a huge fan of his, but yesterday I was. it is impossible not to be when you see his show! He gave us his all!! And we took it!! I am hoarse today, my throat is aching. I was screaming and singing and dancing so much!
And I just CANNOT, cannot get over how good the man is, and his entire band for that matter.
Bruce mixed a lot of his old music with music from his current album. I don't know those songs so well, but it was still great.
I loved when he sung "Lonesome Day", "Born to run" and "Dancing in the dark". True joy! And i loved his last tune, a sing-along called "American Land" about people immigrating to the US in the past from all over the world. I loved singing along! I think all of us did!
What a night, what a night to remember! Now I am looking forward to see him again!! Come back, Bruce, come back!!! You're lovely!

Peter, Keith and I were sitting high up in the "noose-bleed section" slightly behind the stage, but it turned out great regardless. Surrounding us were a bunch of people our own age and a lot older...A graying crowd!! Behind us were a woman, closer to 60, and not in the best mood. She tapped our backs before the concert had even started and said:
"Excuse me, when the concert starts could you just not lean forward and scoot back. I cannot even see the TV-monitor."
We just turned around and told her that we probably would just stand up dancing most of the show, and that this IS indeed a rock concert.
No more words came out of her, thank GOD!!
I can also tell you that the crowd was boiling! People were standing up dancing and screaming for the entire show! VERY fun!!

Oh, and I also have to tell you where the three of us went to dinner before the show...I never thought I would end up there. Ever.
We tried to get into restaurants close to the Verizon Center in order to get a bite to eat before the show. PACKED everywhere. 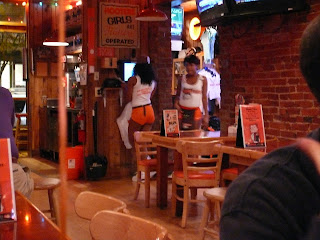 Then I saw a H¤¤ters and suggested we go eat there. Yes, I was desperate for food at this point. SO, in we went! Ha, ha...I thought it was pretty funny after all. Obviously that place is not taking itself so serious. 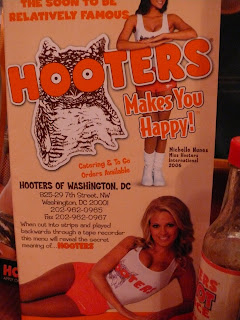 We had good burgers there.
You can see some pics that I took inside the place... 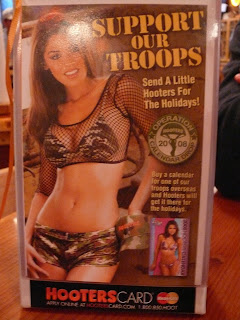 However, no cameras were allowed at the concert. I had to go back to the car and leave the camera there. TOO bad!!!

Now I am about to go out on my power walk! Even though it is raining. Hey, it wont stop me!! Better get out there with my ipod and let the fresh air flow over me...

Sounds like you're still in *concert mode*! Woo Hoo! Good for you! Seems like it was worth the trouble?

AuroraB:
It was so much FUN! And yes, it was worth the trouble. BIG time! Not that it was much of a trouble anywhere :-)
H�r �r det regn och kanske 10 grader...

Despite being in the nosebleed section we had pretty good seats. Really there isn't a bad seat in the house when you get to see "The Boss"!! Awesome concert as usual!! I'd definitely see him again!!
Glad you survived your first Hooters experience....

Keith:
Great yesterday...AND even better to avoid the DAMN Metro!!
Hooters was funny ;-)
Cannot wait for The Boss to get here again!

Why is it called the nose bleed section?